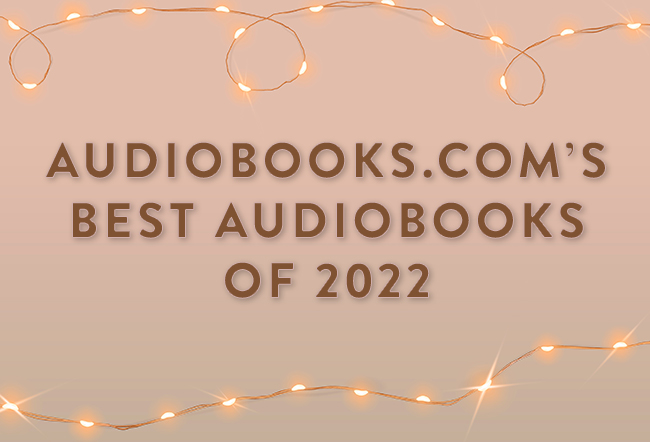 Just like that, we are almost at the end of 2022! As the year wraps up, Audiobooks.com is looking back on the listens that have helped us get in touch with our emotions, kept us on the edge of our seat, and had us falling in love. There were so many great listens from this past year but we have narrowed down our favorites.

Discover Audiobooks.com’s top audiobooks from each month in 2022!

January: The Maid by Nita Prose, narrated by Lauren Ambrose

A dead body is one mess she can’t clean up on her own.

Molly Gray is not like everyone else. She struggles with social skills and misreads the intentions of others. Her gran used to interpret the world for her, codifying it into simple rules that Molly could live by.

Since Gran died a few months ago, twenty-five-year-old Molly has been navigating life’s complexities all by herself. No matter—she throws herself with gusto into her work as a hotel maid. Her unique character, along with her obsessive love of cleaning and proper etiquette, make her an ideal fit for the job. She delights in donning her crisp uniform each morning, stocking her cart with miniature soaps and bottles, and returning guest rooms at the Regency Grand Hotel to a state of perfection.

In Atlas of the Heart, Brown takes us on a journey through eighty-seven of the emotions and experiences that define what it means to be human. As she maps the necessary skills and an actionable framework for meaningful connection, she gives us the language and tools to access a universe of new choices and second chances—a universe where we can share and steward the stories of our bravest and most heartbreaking moments with one another in a way that builds connection.

Every song tells a story.

She’s a star on the rise, singing about the hard life behind her.

She’s also on the run. Find a future, lose a past.

Nashville is where she’s come to claim her destiny.  It’s also where the darkness she’s fled might find her.  And destroy her.

Private investigator and World War II veteran Aloysius Archer heads to Los Angeles, the city where dreams are made and shattered, and is ensnared in a lethal case in this latest thriller in #1 New York Times bestselling author David Baldacci’s Nero Award-winning series.

It’s the eve of 1953, and Aloysius Archer is in Los Angeles to ring in the New Year with an old friend, aspiring actress Liberty Callahan, when their evening is interrupted by an acquaintance of Callahan’s: Eleanor Lamb, a screenwriter in dire straits.

In my book, you will meet a little girl named Viola who ran from her past until she made a life-changing decision to stop running forever.

This is my story, from a crumbling apartment in Central Falls, Rhode Island, to the stage in New York City, and beyond. This is the path I took to finding my purpose but also my voice in a world that didn’t always see me.

Fresh off a bad breakup with a longtime boyfriend, Nantucket sweetheart Lizbet Keaton is desperately seeking a second act. When she’s named the new general manager of the Hotel Nantucket, a once Gilded Age gem turned abandoned eyesore, she hopes that her local expertise and charismatic staff can win the favor of their new London billionaire owner, Xavier Darling, as well as that of Shelly Carpenter, the wildly popular Instagram tastemaker who can help put them back on the map. And while the Hotel Nantucket appears to be a blissful paradise, complete with a celebrity chef-run restaurant and an idyllic wellness center, there’s a lot of drama behind closed doors.

On a bitter-cold day, in the December of his junior year at Harvard, Sam Masur exits a subway car and sees, amid the hordes of people waiting on the platform, Sadie Green. He calls her name. For a moment, she pretends she hasn’t heard him, but then, she turns, and a game begins: a legendary collaboration that will launch them to stardom.

They borrow money, beg favors, and, before even graduating college, they have created their first blockbuster, Ichigo: a game where players can escape the confines of a body and the betrayals of a heart, and where death means nothing more than a chance to restart and play again. This is the story of the perfect worlds Sam and Sadie build, the imperfect world they live in, and of everything that comes after success: Money. Fame. Duplicity. Tragedy.

A heartbreaking and hilarious memoir by iCarly and Sam & Cat star Jennette McCurdy about her struggles as a former child actor—including eating disorders, addiction, and a complicated relationship with her overbearing mother—and how she retook control of her life.

Jennette McCurdy was six years old when she had her first acting audition. Her mother’s dream was for her only daughter to become a star, and Jennette would do anything to make her mother happy. So she went along with what Mom called “calorie restriction,” eating little and weighing herself five times a day. She endured extensive at-home makeovers while Mom chided, “Your eyelashes are invisible, okay? You think Dakota Fanning doesn’t tint hers?” She was even showered by Mom until age sixteen while sharing her diaries, email, and all her income.

Legendary storyteller Stephen King goes into the deepest well of his imagination in this spellbinding novel about a seventeen-year-old boy who inherits the keys to a parallel world where good and evil are at war, and the stakes could not be higher—for that world or ours.

Charlie Reade looks like a regular high school kid, great at baseball and football, a decent student. But he carries a heavy load. His mom was killed in a hit-and-run accident when he was seven, and grief drove his dad to drink. Charlie learned how to take care of himself—and his dad. When Charlie is seventeen, he meets a dog named Radar and her aging master, Howard Bowditch, a recluse in a big house at the top of a big hill, with a locked shed in the backyard. Sometimes strange sounds emerge from it.

October: It Starts with Us by Colleen Hoover, narrated by Colin Donnell and Olivia Song

Before It Ends with Us, it started with Atlas. Colleen Hoover tells fan favorite Atlas’s side of the story and shares what comes next in this long-anticipated sequel to the “glorious and touching” (USA TODAY) #1 New York Times bestseller It Ends with Us.

Lily and her ex-husband, Ryle, have just settled into a civil coparenting rhythm when she suddenly bumps into her first love, Atlas, again. After nearly two years separated, she is elated that for once, time is on their side, and she immediately says yes when Atlas asks her on a date.

But her excitement is quickly hampered by the knowledge that, though they are no longer married, Ryle is still very much a part of her life—and Atlas Corrigan is the one man he will hate being in his ex-wife and daughter’s life.

There may be no tidy solutions or pithy answers to life’s big challenges, but Michelle Obama believes that we can all locate and lean on a set of tools to help us better navigate change and remain steady within flux. In The Light We Carry, she opens a frank and honest dialogue with readers, considering the questions many of us wrestle with: How do we build enduring and honest relationships? How can we discover strength and community inside our differences? What tools do we use to address feelings of self-doubt or helplessness? What do we do when it all starts to feel like too much?

A front-of-the-house Kitchen Confidential from a career maître d’hotel who manned the front of the room in New York City’s hottest and most in-demand restaurants.

From the glamorous to the entitled, from royalty to the financially ruined, everyone who wanted to be seen—or just to gawk—at the hottest restaurants in New York City came to places Michael Cecchi-Azzolina helped run. His phone number was passed around among those who wanted to curry favor, during the decades when restaurants replaced clubs and theater as, well, theater in the most visible, vibrant city in the world.