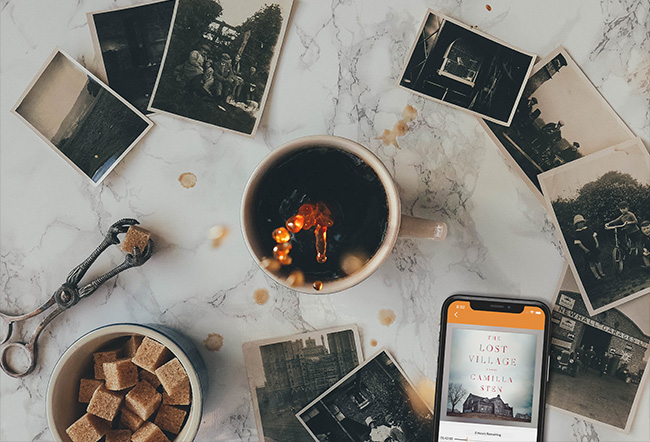 Scary movies are pretty much all I watch these days — from paranormal to slasher and everything in between, they offer a much-needed escape from reality. Watching these freaky flicks while sitting safe and cozy inside really makes you thankful that you’re not dealing with a murderous man in a mask or an angry spirit looking for its revenge.

So, with that in mind, it’s not surprising that when The Lost Village by Camilla Sten popped up in my recommended listens and I saw that it was touted as Blair Witch Project meets Midsommar, hello?? I didn’t even hesitate to pick this one up! These comparisons really do hold up too! The Lost Village had the same uneasy found footage style of The Blair Witch Project while inserting the story of a mysterious secluded Scandinavian village a la Midsommar.

This unputdownable listen follows Alice Lindstedt and her group of friends as they travel to a remote village where almost 900 of its residents vanished back in 1959 leaving nothing in their wake but an abandoned newborn and woman stoned to death in the town square. Alice and her friends are determined to make a documentary and find out what truly happened in this “lost village,” but production is halted as unexplainable things begin to happen, equipment goes missing or is wrecked, and the crew starts seeing things that shouldn’t be there.

The narration by Angela Dawe is really what brought this story to life and allowed me to paint a better picture of each character in my mind. Her narration gave me a feeling of actually peeking behind the curtain of Alice’s internal monologue. There were points of this book that the description of the scene really gave me the creeps, so if you’re a horror/thriller novice, get ready for some nightmare fuel.

The Lost Village was a wild ride with all the suspense, and twists and turns that you could want and it left me guessing until the end. If you’re a fan of a good horror flick or anything from Riley Sager, you’ll definitely want to jump into this audiobook next.

The Blair Witch Project meets Midsommar in this brilliantly disturbing thriller from Camilla Sten, an electrifying new voice in suspense.

Documentary filmmaker Alice Lindstedt has been obsessed with the vanishing residents of the old mining town, dubbed “The Lost Village,” since she was a little girl. In 1959, her grandmother’s entire family disappeared in this mysterious tragedy, and ever since, the unanswered questions surrounding the only two people who were left—a woman stoned to death in the town center and an abandoned newborn—have plagued her. She’s gathered a small crew of friends in the remote village to make a film about what really happened.

But there will be no turning back.

Not long after they’ve set up camp, mysterious things begin to happen. Equipment is destroyed. People go missing. As doubt breeds fear and their very minds begin to crack, one thing becomes startlingly clear to Alice:

They are not alone.

They’re looking for the truth…
But what if it finds them first?

• Staff Pick: The Only Good Indians by Stephen Graham Jones

• Book Clubbin’: 9 Discussion Questions for The Sanatorium by Sarah Pearse